THE DIFFERENCE OF A DIVE COMMUNITY !

It was never our intention to make "Amphibious Diving Center" simply "another" diving center. Our philosophy remains one where we offer what we, ourselves, would like to get as customers of a diving center: a friendly environment, endless discussions about diving and the sea, sharing of experiences, good laughs and of course the necessary knowledge needed for safe and rewarding dives. It is only fair then, that those who know us are talking about a "boutique diving center" where the diving experience begins with the first phone call and ends long after the dive, creating wonderful memories that will last forever. Diving and the sea are what we live for and we always strive to give our best self to those who place their trust upon us. A testament to this, is all the positive comments and the huge support we get, from the hundreds of friends who've been with us already. This is the best proof of what we believe for ourselves as well. 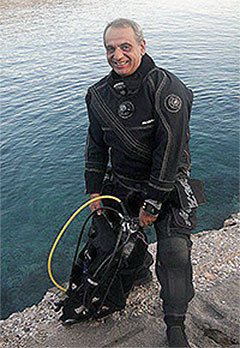 "With over 9.000 hours of living underwater, I feel twice as happy and content"

A whole life dedicated to “The Blue”!

My love for the sea started early on … I begun my studies at the MARINE ACADEMY “ALEXANDROS ONASIS” and at the same time worked as an engineer at the Perama Shipyards (1975-1979). I graduated in 1979 and became a Merchant Marine Engineer having earned 3 scholarships at the same time. From 1979 to 1981 I served at the Hellenic Navy, were I was honored with a commemorative plaque given to me by the Commander of the naval ship I served in!

In 1982, the dream becomes a reality, managing to combine work with pleasure, starting this way the long journey!
First station, Cuba:  It was there that my love with the underwater world began,  doing dives whenever I was given the chance.
Next stations, Russia, Canada, Argentina and the amazing crossing of the  Amazon river from Buenos Aires!
Next stop was Brazil, a place I have visited four times due to its beautiful marine landscapes and sealife. Sao Paulo – Rio De Janeiro – Vitoria, are some of the places I’ve dived while I was there on work. During the eight years of touring the world – having only small breaks – I have visited and dived in countries and places like Japan, Yokohama and Tokyo, Korea, Inchon, Pusan, Ulsan, Sri Lanka, Colombo, Malaysia, Canary Islands, Spain and France! 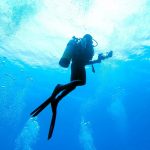 1993: A journey stops only for another one to begin

It was in 1993 when I decided to “disembark” but not lose this special connection I shared with the sea! It was for this reason that, as a one-way decision, I established “Vithos 3” in Holargos, my first diving center. From that point on, diving became a profession and love, at the same time.
In 2003, I relocate the Diving Center to its current location and in 2012 I change its name to Amphibious Diving Center, combining  not only my own personal touch, but that of a close group of friends who became students and also of students who have become and remain up till now very good friends!

With over 9,000 hours of living underwater, I feel twice as happy….not only because I pursued my dreams and lived with tension, but also because I still have beside me people who share with me the same “madness” , the same love and the same respect for the sea and its inhabitants. For these reasons I thank the Lord….. and Poseidon, every day 🙂 !

This website uses cookies to improve your experience. We'll assume you're ok with this, but you can opt-out if you wish.Accept Read More